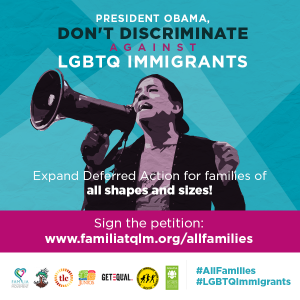 Expand Deferred Action for Families of All Shapes and Sizes

The recent executive action on immigration taken by President Obama came as a result of tremendous effort by affected communities. More than four million undocumented people will be eligible for relief but the way it is structured disproportionately excludes LGBTQ people.

Sign the petition to ask President Obama to recognize our families come in all shapes and sizes and to include LGBTQ immigrants without children in upcoming relief.

The President was not limited by law in the scope of his action. In fact, it was politics that guided his pen, as he calculated the safest level of risk, when what was needed was for him to show unflinching leadership to enact common sense reform. By expanding protection from deportation only to childhood arrivals and biological parents of U.S. citizen children and legal permanent residents the immigration action disproportionately excludes LGBTQ people.

Limiting those who deserve to live without fear only to childhood arrivals or biological parents of US Citizens (and legal permanent resident children) is an error that must be corrected.

Further, the executive action only recognizes certain types of families. Biological parenthood is not and should not be privileged as the sole relation that defines ties to this country. Undocumented LGBTQ people, through loving ties and chosen family, weave together relationships that should be honored, and community that makes up the fabric of this country too.

Millions have finally been provided relief. But millions more have still been excluded.

Take action now to demand that immigration policy change to recognize all families and stop the disproportionate exclusion of LGBT immigrants.